Otosclerosis is something that we don't come across very often, it is a middle ear condition that causes a hearing loss which in fact can be medically reversible. Quite often though people who suffer with it choose to have the procedure undertaken on one ear and not the other. We had a recent customer in our Stillorgan Hearing Aid Centre with the problem and we thought we would write about this little known issue, its treatment and what hearing aids can do for it.

Otosclerosis, which is sometimes called otospongiosis is the name for abnormal growth of bone in the middle ear. It normally occurs around the Stapes, (or stirrup) and impedes the movement of that bone although it can also occur around the round window both of which can be seen below. As the disease progresses it will result in a conductive hearing loss, which means that the sound is no longer being transferred across the middle ear cavity as well as it should be. 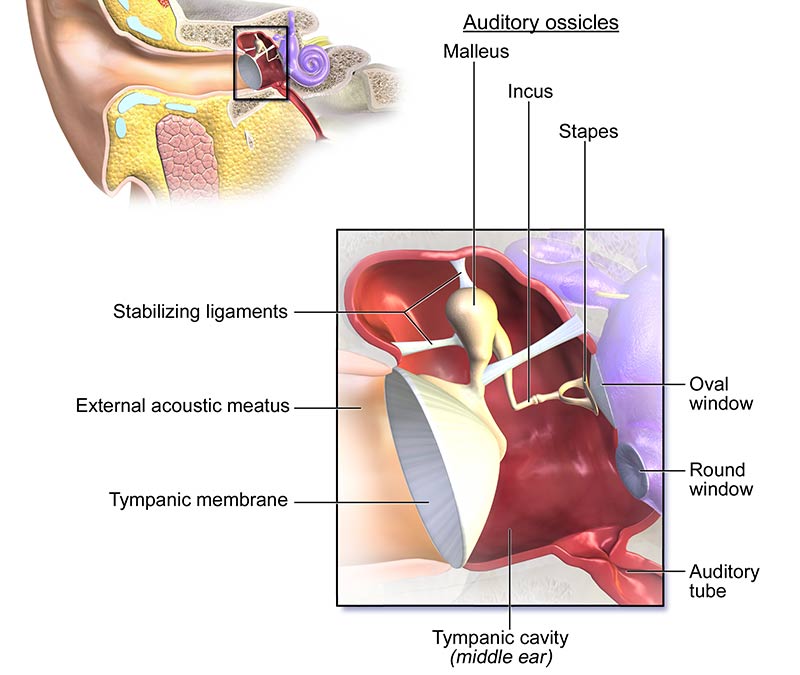 Otosclerosis is an inherited disease which passes down through a family line. As I said, the primary form of hearing loss in otosclerosis is conductive hearing loss. With a conductive hearing loss, sounds reach the ear drum as normal but are not transferred across the ossicular chain (middle ear bones) in the middle ear properly. The sound does not reach the inner ear (cochlea) properly, which in early cases of otosclerosis works fine. The problem will usually begin in one ear but will eventually affect both ears. As the problem progresses, most patients with otosclerosis notice tinnitus (head noise) to some degree.

Although we believe that Otosclerosis is inheritable and therefore genetic loss, its occurrence and trigger factors are less well understood. It can occur in men, but in my experience it is mostly women who have presented with it. Original thought was that the condition itself may well be triggered by hormonal changes caused by puberty or alternatively pregnancy in women who are susceptible. Although recent research seems to dismiss pregnancy as a worsening or triggering factor. Lately though there has been some consideration to a connection between the measles virus and otosclerosis. It is thought that perhaps teh measles virus may act as a trigger in those people who are susceptible to the condition.

Treatment of otosclerosis can be undertaken in three distinct methods, medical, surgical and amplification. Medical treatment involves pharmaceutical treatment using sodium fluoride. Another treatment has recently come to light using bisphosphonate medications but the treatment is in the early stages of trials. Both treatments are designed to slow down the progression of the disease, they are not a cure and they will not restore any lost hearing.

The method of surgical treatment of choice is called a Stapedectomy.  A stapedectomy consists of removing a portion of or in fact all of the sclerotic stapes footplate. It is then replaced with an implant that is secured to the incus. A stapedectomy restores the function of ossicular movement and allows transmission of sound waves from the eardrum to the inner ear.

In recent times this surgery has been updated and a new variant has appeared called a stapedotomy. This procedure is performed by drilling a small hole in the stapes foot plate with a micro-drill or a laser. The surgeon then inserts a piston-like prosthesis. The success rate of either surgery depends greatly on the skill and the familiarity with the procedure of the surgeon.

Comparisons have shown that stapedotomy appears to deliver comparable results to stapedectomy, with fewer complications. Therefore, stapedotomy is becoming the preferred procedure under normal circumstances.

Firstly, hearing aids can not prevent cure or inhibit the condition, however they can help treat the largest symptom of the condition which is hearing loss. In fact, hearing aids can treat conductive hearing losses of any type or cause very well. This is because the inner ear function is normally not impaired or impaired to a great degree. So if we can power the sound information across the middle ear, the inner ear will do what it does naturally. In many cases, the treatment for conductive hearing loss would involve some sort of power or super power hearing aid. A word of caution though, the condition is of a progressive nature so there is a chance that without eventual corrective surgery, a total loss of hearing may result.

In our experience we have seen several Patients who have had corrective surgery on one side who wear a hearing aid on the other un-treated side. Occasionally the hearing loss in the un-treated side may become so severe that treating it with a power hearing aid may in fact cause difficulties for the good ear. In cases like this a better option is often a CROS or Bi-CROS hearing system which transfers sound wirelessly from one side of the head to the good ear on the other side. The good ear then receives sounds from both sides and the brain quite amazingly works it all out.

We have had some amazing success with CROS and Bi-CROS systems, and it never fails to delight me when the Patient is amazed to be hearing sounds from their bad side. It often is really a jaw dropping moment for them. In finishing, if you are diagnosed with Otosclerosis, you really should consider surgical treatment on at least one ear. There are risks and they will be explained to you, but success rates are very high. After a hopefully successful treatment of one ear, you can then consider treatment of the second ear by surgery or amplification. As always, if you have any questions, don't hesitate to contact us. If you would lie a hearing test or you would just like a chat about hearing aids, give us a ring on 1800 848 888 or book an appointment online.

Worried About Your Hearing?